Imperial Cities of the Danube
The Danube journeys through the very heart of Europe, calling in at some of the world’s most elegant, vibrant and inﬂuential cities...

Imperial Cities of the Danube

The Danube journeys through the very heart of Europe, calling in at some of the world’s most elegant, vibrant and inﬂuential cities. Multiple capitals, including Budapest, Vienna and Bratislava, sit along the course of this beautiful waterway, providing you with an insight into the history of the continent.
Absorb all that Europe’s most cultured river has to offer, with its wealth of grand baroque architecture, medieval cities, picture perfect towns and the sights that inspired Strauss and Mozart. With the peace and tranquillity of the enchanting Wachau Valley, this truly is a cruise which offers a host of delights. 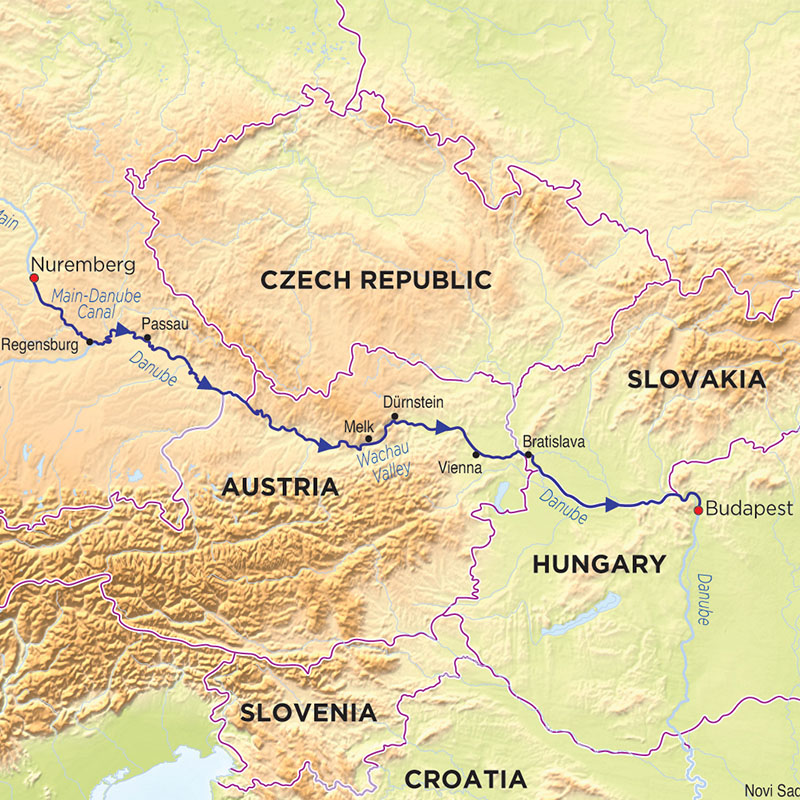 See our itinerary below...

Below you can explore the itinerary for this cruise. Click on the arrows to see more information on each days itinerary. Simply click the ‘Book this Cruise’ button to get booking and embark on ab exciting journey with us… 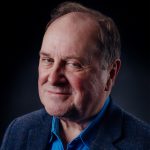 James Naughtie is one of Britain’s best-known broadcasters. A special correspondent for the BBC, he presented Today on Radio 4 for twenty-one years and has reported from home and abroad for more than three decades. He presents Bookclub on Radio 4 and has written and broadcast on classical music for many years. As an author he has published books on politics, a history of music, an account of experiences over half a century in the United States, and two novels.

Join our representative at London Heathrow airport for pre-ﬂight refreshments, before boarding the accompanied ﬂight to Munich and onward transfer to Nuremberg where Royal Crown awaits. 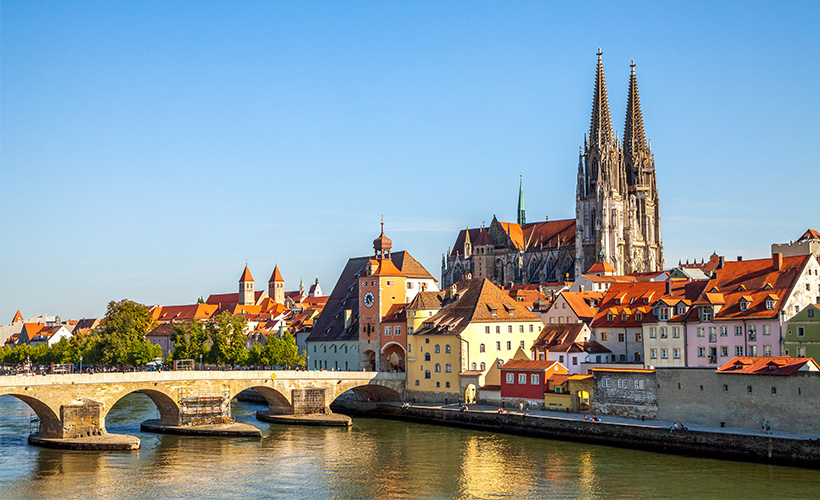 Situated at the northernmost point of the Danube River, the UNESCO World Heritage Site of the Old Town of Regensburg is the best-preserved medieval city in Germany. Founded by the Romans in 179 AD, Regensburg has a special charm and offers world renowned sights such as Porta Praetoria, the gate to the Roman Castra Regina, the Old Stone Bridge and St.Peter’s Cathedral.

In 1146, German builders completed work on a stone bridge crossing the Danube. With the project ﬁnished, the tiny construction office, next to the bridge, found new life as a food stand serving meat dishes. Today, it still serves customers, making it one of the oldest restaurants in the world and we sample the local speciality of Bavarian sausages. 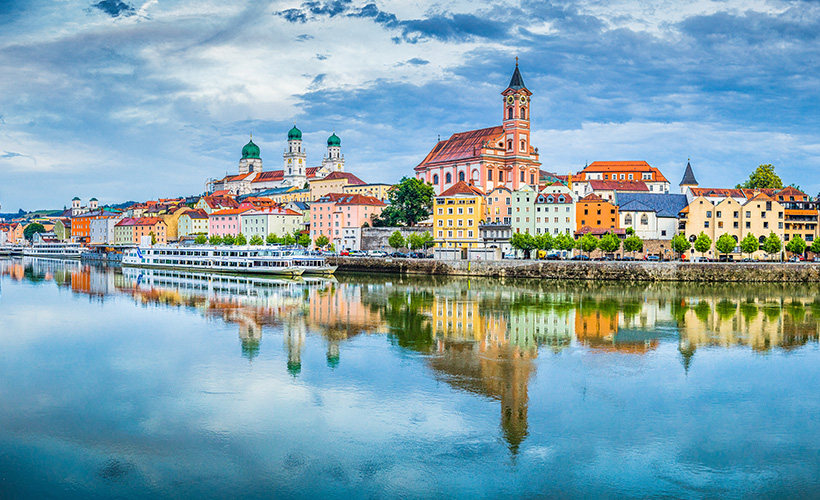 Constructed at the conﬂuence of three rivers, the Inn, Ilz and Danube, the Baroque design of Passau is dominated by large squares, romantic promenades, winding lanes and majestic bridges. Framed by the Veste Oberhaus castle and the pilgrimage monestary Mariahilf, the historical city centre of Passau looks like a ﬂoating ship. We take a guided walk through the 2,000 year old city which culminates in a visit to the breathtaking Cathedral of St Stephen, which houses one of the world’s largest pipe organs.

We while away the afternoon on board as the stunning scenery of the UNESCO protected Wachau Valley glides gently by.

The enchanting Artstetten Castle is situated high above the Danube in a charming park and is ﬂanked by seven characteristic towers. This is a place of commemoration for Crown Prince Franz Ferdinand and his wife, Sophie Duchess of Hohenberg. Both were assassinated in Sarajevo in 1914 and have found their ﬁnal resting place here. The Archduke Franz Ferdinand Museum provides us with a look into the eventful life of the crown prince and his family.

On the banks of the Danube River, the ancient city of Dürnstein is best known for its grape growing, historic character, and castle that imprisoned English King Richard the Lionheart. Narrow cobbled streets surrounded by historic buildings are hidden behind a fortiﬁcation wall, all waiting to be discovered on our walking tour. From Dürnstein, we travel to the picturesque wine-growing village of Weissenkirchen to sample the excellent local wines.

Sailing further east, the romantic city of Vienna and former capital of the Habsburg Empire beckons. A panoramic tour of this elegant capital takes us around the famous Ringstrasse and the Old Quarter, including St Stephen’s Cathedral and one of the oldest opera houses in the world.

In the evening, we are treated to a private tour, exclusive concert, drinks reception and dinner at the magniﬁcent imperial palace of Schönbrunn, the main summer residence of the Habsburg rulers. At the end of the 17th century, Emperor Leopold I

built on this site for the dowager empress Eleonora of Gonzaga in 1642, it was to grow into a palatial imperial residence over the course of the 18th century. During the reign of Maria Theresa, as an imperial summer residence, Schönbrunn Palace became the glittering focus of court life. From this time on, it played host to the leading statesmen of Europe. 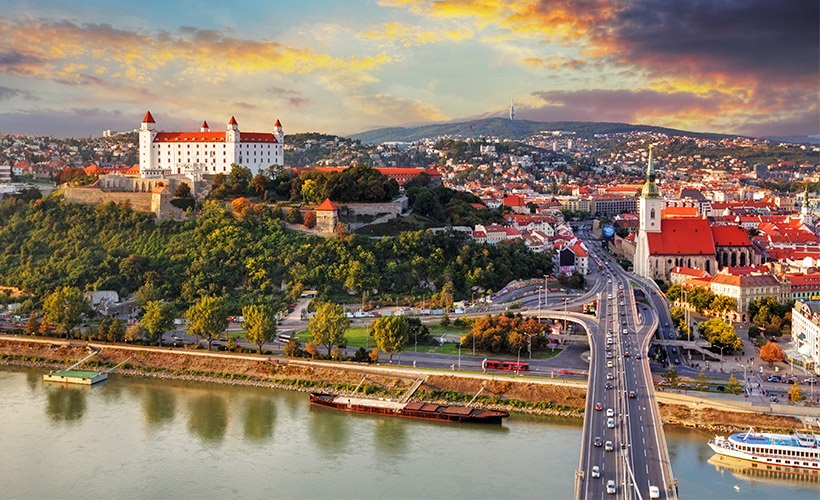 Our cruise continues along the Danube into Slovakia, where we visit the capital, since the country’s independence in 1993, Bratislava. Bratislava is a mosaic of illustrious history: a medieval and Gothic old town, baroque palaces commissioned by Hungarian nobles, and the crowning castle, rebuilt to Renaissance ﬁnery.

Our tour of the old town includes many of the city’s historic buildings, such as the only remaining medieval fortiﬁcation, St Michael’s Gate, St Martin’s Cathedral, the Baroque Grassalkovich Palace and the Neo Classical Primate’s Palace.

We conclude our visit with a string quartet recital in the gothic Klarissen Church, part of a complex of medieval buildings forming the former Convent of Poor Clares in the old town of Bratislava.

We disembark Royal Crown in Budapest for a short city tour, before being transferred to the airport for our ﬂight home.

Our decks and Cabins

Below you can see our decks and what cabins are on each of them. If you click the arrow you can see further information on each cabin and what it has to offer. So get exploring and get booking. We look forward to you joining us on board for an experience of a lifetime… 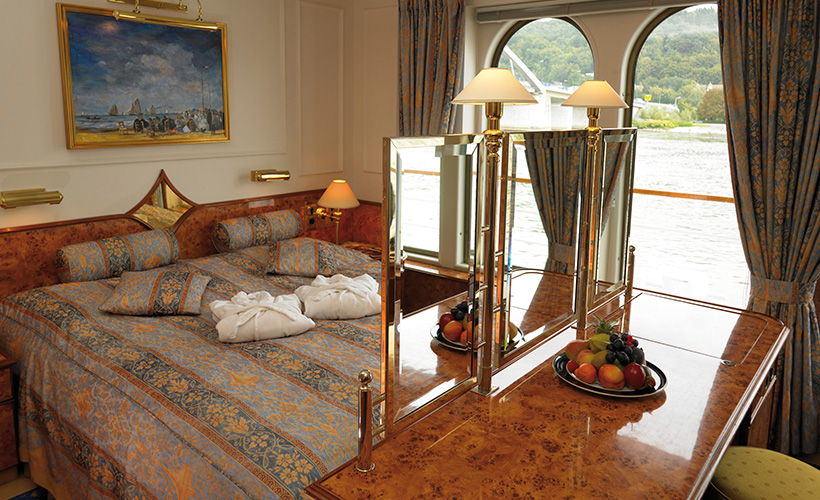 The Royal Suites are centrally located on the Panorama Deck, each with a king-size bed comprising two single mattresses in one solid bed frame with two duvets; the beds cannot be split into twin format. The suites also comprise a separate seating area with sofa, easy chair and dressing table/writing desk. 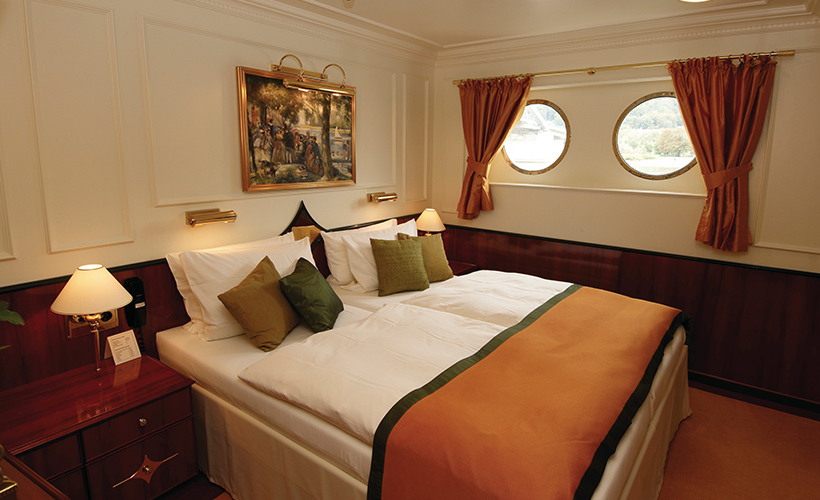 The Premium Cabins are located on the Select Deck, each with a queen-size bed comprising two single mattresses in one solid bed frame with two duvets; the beds cannot be split into twin format. 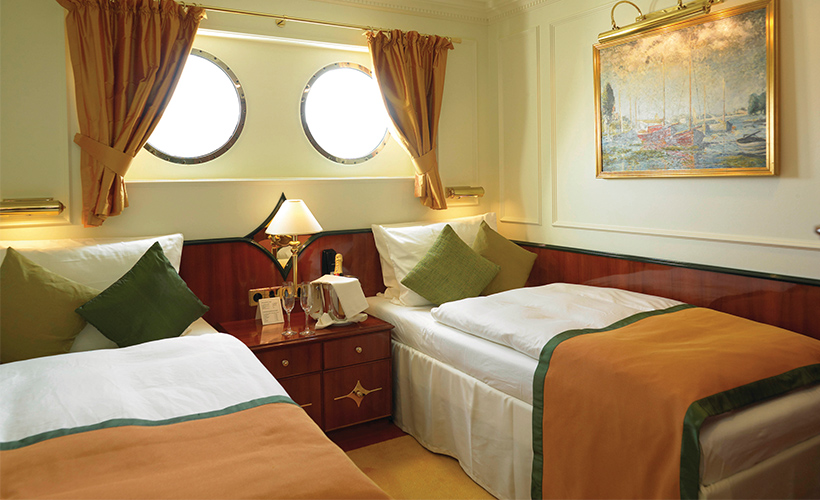 The Deluxe Cabins are located on the Select Deck each with twin beds; the beds cannot be arranged as a double.

The Deluxe Cabins are located on the Select Deck each with twin beds; the beds cannot be arranged as a double.

Please feel free to get in touch with us if you have any queries regarding our Cruise or booking. We would be delighted to hear from you and help you on your way to enjoying a wonderful cruise with us...