Ardgowan is a beautiful late 18th century house which stands at the mouth of the River Clyde, looking across to the hills of Argyll, and south-west to the islands of Bute and Arran. Its predecessor, an ancient keep – now a romantic roofless ruin in the garden – stands testament to the strategic importance of the site, which was much fought over during Viking invasions and later during Scotland’s Wars of Independence. 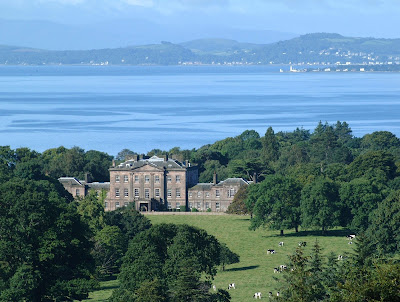 The house in the early 14th century, once taken by Robert the Bruce, became one of a string of west coast royal fortresses until in 1403 it was given by King Robert III to his natural son, John, whose descendants have lived there ever since.

In the late Georgian period the family (now called Shaw Stewart) decided to build a new neo-classical house here which a follower of Robert Adam, named Hugh Cairncross, designed for them. It consists of a pedimented main block, which originally centred on an elegant curved double flight of steps, with wings linking to Venetian-windowed pavilions. The sea-facing garden façade is configured differently, with a central bow rising into the roofline. The main reception rooms are on the first floor and retain their original contents – Gillow furniture supplied when the house was completed in 1801, family portraits of its successive owners, including a run of pictures by Henry Raeburn, paintings and sculptures collected on various Grand Tours and some curious Napoleonic relics including the Emperor’s hat. In the library with its tall well-stocked Gillow bookcases there survives an extensive archive of material relating to the completion and furnishing of the house and a large assembly of family letters and journals. These reflect the boisterous happy life lived within these walls by generations of Shaw Stewarts which has given Ardgowan the distinctive family atmosphere much commented on by visitors today. 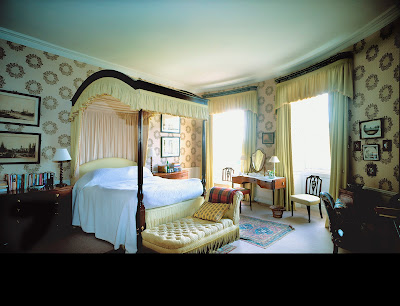 The 350 acre policies were laid out in the same year that the house was built. The River Kip was re-routed to flow in a new paved course through the park, groves of trees were planted and winding picturesque walks were devised through the woods to the shoreline to take advantage of the spectacular scenery. The mild Gulf Stream climate encouraged the growth of tender trees and plants in both parkland and the garden which was designed in the 19th century. The house is positioned at one end of an extensive estate which stretches from the hills behind Inverkip to the high ground to the back of Greenock and Port Glasgow. The farming operation is carried out on a number of tenanted farms; there are also forestry and livery businesses run on the estate. Lucinda Chetwode (formerly Lady Shaw Stewart) runs residential educational courses from Ardgowan too, studying the art collections of Scotland and using her own archive and collection to analyse the social history of the 18th century country house. She also runs her antiques business – Ardgowan Antiques – from here.

She, her second husband Christopher, and her son Ludovic are always delighted to have Hebridean Princess groups visit the house.

Hebridean Princess is due to visit Ardgowan House on the following cruises in 2018:

>> Architectural Gems of Argyll and the Isles commencing 30th October 2018

Destinations – The Holiday and Travel Show

In January we will be attending one of the UK’s biggest cruise and travel shows.Come…

Hebridean Island Cruises has been working with its customers to raise funds for Sea-Changers, the…