The small luxury cruise ship operator, Hebridean Island Cruises, is proud to announce that it has been nominated for several major awards.
Ken Charleson, Managing Director for Hebridean Island Cruises, remarked
“Being nominated for these three prestigious awards is testament to the hard work and dedication our staff, both on board and ashore, have given to the company over the past twelve months.  We are committed to providing the best possible cruise experience to our guests and to be nominated in this way is a true accolade and reward for everything we do.  I hope as many of our guests and partners will take this opportunity to cast their votes to help us secure a win.”
Hebridean Island Cruises has been nominated for:-
BRITISH TRAVEL AWARDS 2017 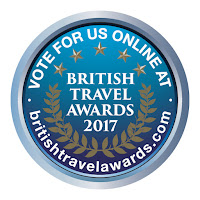 Hebridean has been nominated for BEST LUXURY CRUISE LINE in the prestigious 2017 British Travel Awards (BTAs).  The winners will be determined by the consumer, who has until 30 September to cast their vote, with the successful companies announced at the BTA Gala Awards Dinner, being held in London on 29 November 2017.

Hebridean has been nominated for BEST LUXURY CRUISE LINE and BEST BOUTIQUE CRUISE LINE in the UK’s most prestigious cruise industry awards.  The Cruise International Awards 2017 are your chance to vote for your favourite cruise lines, travel agents, destinations, holiday extras and blogs which have impressed you during the past 12 months.
>> Click here to vote for Hebridean Island Cruises in the CRUISE INTERNATIONAL AWARDS 2017

Hebridean has been nominated for BOUTIQUE/ADVENTURE CRUISE LINE of the year.  From the basis of thousands of entries, Food & Travel Magazine has compiled the shortlist for our 2017 Reader Awards.  Now it’s the final voting round to decide who will be the winners. Simply choose your favourites from the shortlisted candidates, and those with the greatest number of votes on the closing date will be crowned the winners at our presentation ceremony in September.

After several months of work Hebridean Island Cruises is delighted to launch its new website.…

A Feast for the Senses

During this winter refit period, we have continued with our programme of cabin refurbishment. Once again…