Cruise of the Week – The Romantic Main and Rhine

German art has often been overlooked and neglected. This is particularly the case for the artworks produced during the middle ages and Renaissance. Yet Germany has an extremely rich and varied tradition in the history of art; from the precise Renaissance woodcarvings and prints, to romantic paintings imbued with beauty and mystery, to tumultuous period of the Third Reich, where art was distorted into a tool of terror. In July 2019, guests on the Romantic Main and Rhine river cruise will have the wonderful opportunity to explore this tradition, and see gems by the german greats: Albrecht Dürer, Hans Holbein the Younger, Lucas Cranach the Elder, Stefan Lochner, Max Liebermann, Max Beckmann, and Caspar David Friedrich. 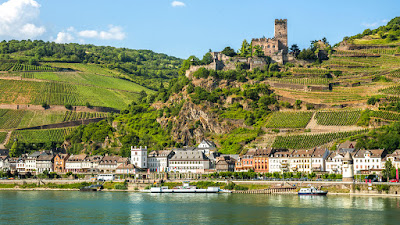 Why have we dismissed German art? The truth is we haven’t, at least, not always. In the late 19th century Britons were extremely knowledgeable about German culture; literature, poetry, music and art. At this point, and in the 18th century, German culture laid the foundations for the Western world. Germany invented the romantic sensibility, and it was Caspar David Friedrich who depicted this sensibility in paint, in his melancholic and highly imaginative works.

But in the 20th century it all went wrong; people struggled to appreciate the new art emerging from Germany. Perhaps it was too raw for their taste. Max Beckmann for example, described the effects of World War I as an ‘injury’ to his soul and produced images reflecting his experience that are confrontational, powerful and haunting. Knowledge and appreciation for German art dwindled during the first world war, and disappeared almost completely by the time of the second.

In July, we will be lucky enough to explore German works in some of the finest collections in the country, as we cruise along the Main and Rhine. We start the week with a visit to Schloss Weissenstein, an opulent Baroque palace complete with marbled staircases, frescoed ceilings, and a shell-studded grotto. Here guests can admire Lothar Franz’ large collection of Old Masters, including works by Dürer and many by other European painters including Breughel, van Dyck, Rubens and Titian.

A particular highlight of our trip for art lovers will be a visit to the Städel museum in Frankfurt. The collection spans 700 years of art; from the middle ages, to the present day. Look out for the German greats here; the collection includes works by Hans Holbein the Younger, Lucas Cranach the Elder, and an exquisitely coloured early work ‘The Little Garden of Paradise’ by an anonymous artist, known as the Upper Rhenish Master. The Städel museum is also the location of some fantastic 20th century German paintings. These include works by Max Liebermann, a German-Jewish Impressionist painter who became the leading painter in 1890s Berlin. His portraits and impressionistic landscapes were in great demand in the 19th century, but due to his Jewish background, his work was confiscated during Nazi rule. Max Beckmann, Otto Dix and Ernst Ludwig Kirchner are also represented; three ‘degenerate’ artists who explored the brutalities of the war in works exploding with colour, power and expression. The collection also houses masterpieces by European artists, including works by Jan van Eyck, Vermeer, Botticelli, Monet, Degas and Picasso.

In Cologne, guests will be treated to two artistic wonders. The prestigious Wallraf-Richartz collection will again provide an opportunity to see German masters, including works by Dürer and Caspar David Friedrich. Personally, I am extremely excited about finally visiting a work known as the ‘Cologne Mona Lisa’, by Stefan Lochner, one of the most famous German medieval painters. The work, officially titled ‘Madonna in the Rose-bower’, is a panel painting that dates from around 1440. It is one of the finest examples of Mary shown in a hortus conclusus (an enclosed garden), a symbol of her virginity. Our final excursion will be to Cologne cathedral, a building adorned with treasures, including the altar at the heart of St. Mary’s Chapel, painted in 1442 and considered to be a masterpiece from the late Gothic Cologne School of Painting.

This trip will be full of varied delights for art and culture lovers. Expect to be bombarded with artworks that are opulent and beautiful, but also those that are powerful and provocative. I look forward to seeing you and to discussing the works on board!

A Serenade to the Hebrides – by Mark Dury

Read the Latest Edition of The Hebridean Times Here

We set sail from Greenock in March to commence our 31st season. Signs of spring…