An insight into river cruising on board Royal Crown

2016 marks the fifth year of operation for Hebridean River Cruises on board Royal Crown.  During this time I have seen many pictures of the vessel in our brochures and in photographs taken by our guests and crew, however until now I had not seen the ship in her full glory. 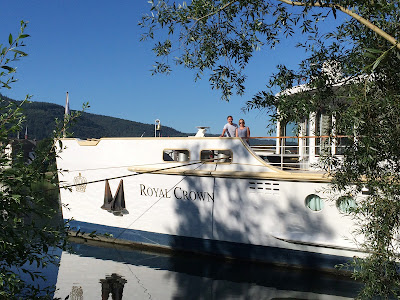 I was lucky enough to be offered the chance to take a familiarisation visit to the ship and join the Flavours of the Rhine, Moselle and Saar cruise in July this year.  I thought I knew what to expect of the ship but what I was not prepared for was the similarity between this vessel and our very own Hebridean Princess.  Both ships have a similar traditional style with gleaming brass and polished wood panelling in abundance, both exude the same relaxed, friendly ambience and warm welcome.  They are comparable also in the small number of guests they carry and the all-inclusive nature of the cruises.
Hebridean’s legendary standards of care, service and attention to detail also extends to the river cruises with all itineraries including accompanied travel to and from the ship by air from London Heathrow or, on selected cruises, by Eurostar from London St Pancras.
Our experience began with a very warm welcome at Heathrow airport from Hebridean Princess Chief Purser David Indge who was acting as Hebridean Host for our cruise, and lunch at the Gordon Ramsay Plane Food restaurant prior to boarding our British Airways flight to Amsterdam.
On arrival at Amsterdam we were met by our local guides and escorted to the coach for the transfer to the ship which was berthed right in the centre of the city, opposite the Central train station.  We were welcomed on board by our Cruise Director, Sheila Salmon.  Sheila has many years of experience sailing the rivers of Europe, is multi-lingual and makes sure that everything happens as and when it should!  We were shown to our cabin and our luggage was delivered minutes later by members of the ship’s crew for whom nothing was too much trouble and everything was delivered with a smile.
Once we had settled in to our cabin we made our way to The Lounge for a cup of afternoon tea, or something a little stronger if preferred!  After exploring the ship it was time to freshen up for dinner and, following an introductory talk by our Hebridean Host Dave Indge and a safety briefing by the Captain, we experienced our first taste of Royal Crown cuisine at dinner.
In contrast to Hebridean Princess, there are no tables for 2 on board Royal Crown but a free seating policy and tables for 6 or 8 makes for a very friendly and sociable atmosphere at meal times with all guests, and the Hebridean Rivers team, getting to know each other and share tales of previous cruise experiences.  The cuisine, however, was redolent of that on Hebridean Princess, with beautifully prepared and tasty dishes delivered with very efficient service, and the portion sizes neither too big or too small. 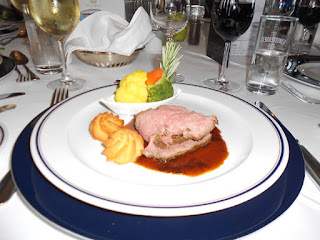 There are 3 grades of cabins on board Royal Crown arranged over 2 decks.  The Royal Suites are located on the same deck as the public areas and feature large picture windows and a seating area, the Premium and Deluxe cabins are on the deck below and have twin portholes.  All the cabins are well appointed with en suite shower rooms, cleverly designed to make the most of the available space and enhanced with Hebridean slippers, bathrobes and Molton Brown toiletries.
During our cruise we were blessed with lots of sunny weather and blue skies so the social hub of the ship was the large Sun Deck which had ample space for all guests to relax and enjoy the superb scenery as we gently cruised along.  The ever-smiling crew were always on hand to provide us with liquid refreshments whenever we required them and one lunch time we enjoyed a fabulous deck barbecue. 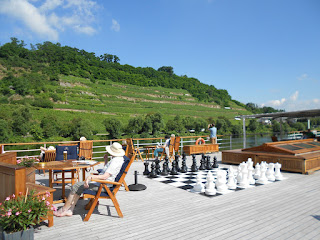 Our days seemed to strike a perfect balance of tranquil cruising and visits to picturesque towns and cities with knowledgeable local guides to point out the highlights and regale us with historic tales.  In keeping with the theme of the cruise many of our visits were food and drink related and we tasted cheese in Edam, beer and chocolate in Cologne and wine and mustard on the Moselle!
Our Guest Speaker France Bissell revealed her passion for food at a series of 3 lectures during the cruise which were very well received, and she was even kind enough to share a selection of her own recipes in booklets which were a lovely memento of the cruise.  I, for one, cannot wait to get cooking!
Entertainment on board is provided by Hebridean’s Musician, Will Marshall, who plays the piano before and after dinner,  plays in the Haggis at the Farewell Gala Dinner on his accordion and also performs Robert Burns’ Address to the Haggis.  Will also tested our little grey cells with a quiz and ‘Call My Bluff’ which brought out the competitive spirit in some of us. 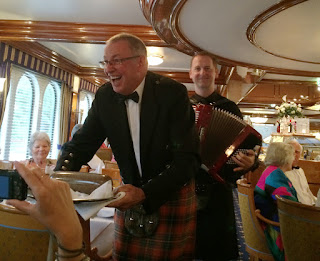 Royal Crown is a lovely ship with a very happy and efficient crew, and a river cruise is an excellent way to visit some of the most scenic and off the beaten track parts of Europe.  Add to this a little touch of Hebridean magic and I am sure you will agree that a Hebridean River Cruise most certainly is the relaxing way to cruise.
By Louise Pratt – Sales Consultant

To celebrate their 25th Anniversary, Luxury Scotland has released a new limited-edition version of Monopoly featuring…